One of the best ways to improve as a business is to learn from the mistakes of others. Even the most successful and well-established brands have had their marketing fails, giving us all something to think about with perfect examples of what not to do when it comes to releasing an ad campaign.

Marketing teams of many brands choose stock images as the source of visuals for their digital and offline advertising campaigns since it’s a safe choice. Most contemporary stock websites provide a rich collection of royalty-free authentic and artistic images that are good for most marketing purposes. However, it helps to be careful.

In 2018, Samsung Brazil used a stock photo taken with a DSLR to promote the possibilities of their Galaxy A8 smartphone selfie camera in their Twitter account. This caused quite a lot of criticism and is an example of a common marketing gaffe. There are plenty of other ways in which marketing campaigns can go wrong and cause substantial harm to a brand’s image.

Nowadays, however, marketers are being increasingly called out for ad campaigns that are unwittingly insensitive or discriminatory. Audiences today are more socially aware than ever and are far more vocal when it comes to voicing their displeasure against marketing campaigns that are tone-deaf and offensive. This article lists the most high-profile examples of such marketing fails and their takeaway lessons.

In 2017, Adidas sent an email to its clients that participated in the Boston Marathon with the subject line ‘Congrats, you survived the Boston Marathon!’ You may think that this sounds perfectly okay. However, here’s why it was a huge mistake. There was a bomb attack that took place during the Boston Marathon of 2013, which killed three people and left more than 250 people injured.

Naturally, this led to a controversy. Many people condemned the poor choice of words and said that the email was insensitive, inappropriate, and insulting to the families of the victims and the survivors of the attack. Adidas was quick to apologize the next day, but the damage to the brand’s image was already done. 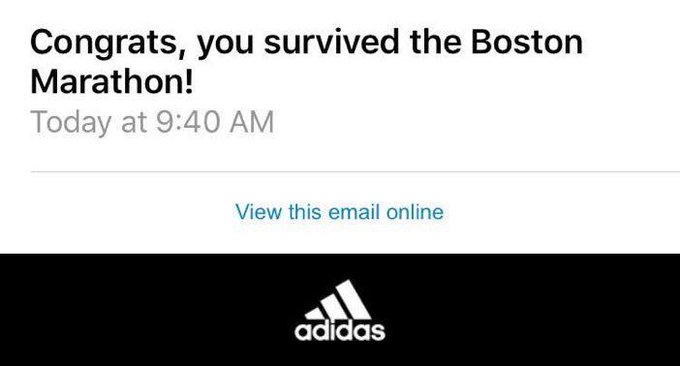 The lesson: Mass emails can be tricky. It’s always a good idea to have an editor or even several other people review your email marketing campaigns before they are sent out into the world. You can’t undo some mistakes, so better be safe than sorry even if it takes extra time to review the copy. A good way to stay objective is to imagine a million people from all walks of life reading every word of your mass emails.

In the summer of 2019, the Italian fashion house Versace created a T-shirt with a list of countries and their cities. The T-shirts mentioned Hong Kong and Macau as independent territories and not a part of China. Around the same time, other popular fashion houses, namely Givenchy and Coach, had also released similar merchandise that listed Hong Kong as an independent territory.

The brands received heavy criticism on Chinese social media platforms and also from media outlets, and public personalities. The entire incident was especially controversial because of the pro-democracy protests in Hong Kong that had been underway for several months. Chinese brand ambassadors of all the mentioned brands announced that they would not work with the retailers anymore. As a result, the fashion brands had to issue several apologies and withdraw the items from their shops.

The lesson: You must never underestimate the importance of research when it comes to advertising and marketing. Paying attention to the current world events and political situations in different countries as well as regions is extremely important when you create ads. Do your research and then some more and also conduct extensive fact-checking before releasing any official statement.

Sometimes, collaboration with stars and influencers can go drastically wrong, just like Pepsi’s 2017 ‘Live for Now’ ad film that featured Kendall Jenner. The commercial shows a young crowd marching through streets with signs with vague and generic slogans like ‘Join the conversation’ or ‘Love’. Eventually, the protest is joined by Kendall Jenner who hands a police officer a can of Pepsi while the crowd cheers.

The ad caused controversy and was pulled back by Pepsi a day after its release. While some people pointed out the weak and unclear message of the ad, many others saw it as an insensitive allusion to the Black Lives Matter protests.

The lesson: When you are creating an ad film, one of the things you must keep in mind is why your product is useful for your target audience. Be clear with your message. The modern audience is socially aware and sensitive. You must ensure that the message of your advertising campaign is clear and hard to misinterpret. There must be no vagueness as it can create room for different interpretations, causing some people to assume the worst.

4. Coolest Monkey In The Jungle (H&M)

At the beginning of 2018, the popular high-street fashion brand H&M had released a new collection of sweaters that featured a hoodie with the words ‘Coolest monkey in the jungle.’ The item was available for purchase on the brand’s website. It featured an African American child model wearing it. The rest of the collection was shot with white models.

Understandably, everyone on the internet was furious about the image in question. Many celebrities, including the popular Canadian pop musician, The Weeknd, expressed their disappointment in the fashion brand and said they would boycott it. Following this, the company apologized and dropped the item from the collection.

The lesson: It might be a good idea to test a campaign with the help of a test group, before its launch. Ensure that you seek advice from your employees and editors. The simplest solution is to be very mindful that your content does not contain the slightest hint of a racist message.

In 2018, Miele, a German domestic appliances manufacturer decided to congratulate their female audience on International Women’s Day with a Facebook post that included a photo of four women looking very excited next to a washing machine and a dryer. The worst part of the post was the text which said ‘May all women always remember to embrace what makes them unique!’

Obviously, Miele had to delete this post just within a few hours from posting it. The ad was seen as a reinforcement of gender stereotypes with many saying that the image and the copy looked like it came straight from the 50s. The choice of the photo was particularly controversial because International Women’s Day is meant to be a day to celebrate women’s achievements, diversity, and strength.

The lesson: We all know that old-fashioned gender stereotypes are very offensive. Yet, one finds them making their way into marketing campaigns more often than they should. They have no place in modern discourse. It’s best to be extremely careful to ensure that your campaign does not carry any sexist connotations.

The commercial was condemned by human rights advocacy groups and many marketing professionals for being offensive to gay people. The brand had to pull the ad, and in the US the commercial was banned even before it aired.

The lesson: Even if you think stereotypes are great for comic relief, you must at any cost avoid stereotypes that perpetuate discrimination based on race, gender and sexuality. They are widely unacceptable among the modern audience.

It’s not easy to attract the audience’s attention and stand out as a brand in a highly competitive space. Creativity in marketing campaigns is essential. However, it is also very crucial to avoid getting carried away with the creative process and offend the sensibilities of your audience, especially those that belong to marginalized communities.

We hope you take cues from this article and avoid similar missteps in your marketing campaigns. Run your campaign by editors and even test groups to stray away from offending anyone, even if that was not your actual intention.

Anna Pozdeeva
Anna Pozdeeva is a graduate of Moscow State University with a Bachelor’s degree in journalism. She is currently a writer at Depositphotos covering visual culture and topics on marketing.